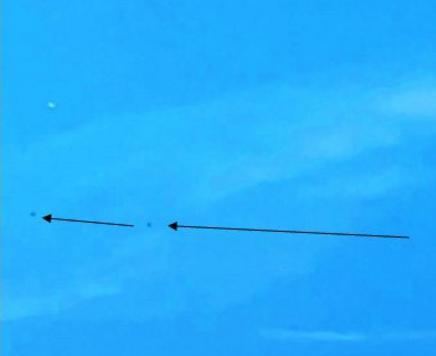 Close-up of one object 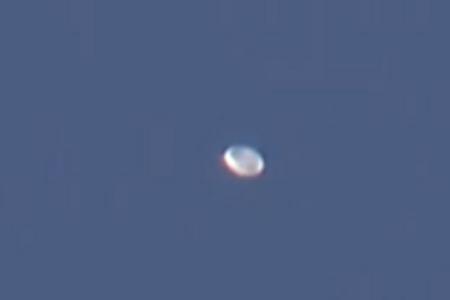 To see more information and videos of these objects click on the links below: 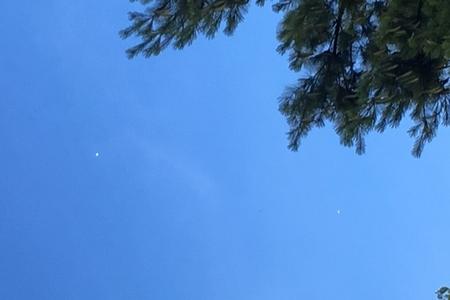 White object to the upper left

​Dark object moving underneath the white object at over 8,200 MPH. (two frames were merged to show the tracking of the dark object.

Multiple UFO reports were filed with the Mutual UFO Network and the National UFO Reporting Center during the week of June 20, 2019 regarding large white orb-shaped objects in the skies over Kansas City, Missouri. A total of three of these objects were visible over a six-hour period and witnessed by thousands of people. The event was covered in local and national media.

The National Weather Service was contacted after multiple witnesses called local TV stations in an effort to find out what the objects were, and the NWS Tweeted “We honestly have no explanation for the floating objects over Kansas City,” which prompted a plethora of theories about aliens in the skies over KC.

DARPA (Defense Advanced Research Projects Agency) release a statement on June 20 which indicated they released three high-tech balloons on June 18, 2019 “Last night, DARPA launched three balloons from Cumberland, Maryland, in a flight test for the Adaptable Lighter Than Air program. Over next few days, ALTA will demonstrate capability for wind-borne navigation of a lighter-than-air vehicle over extended ranges. The goal of the Adaptable Lighter Than Air (ALTA) program is to develop and demonstrate a high altitude lighter-than-air vehicle capable of wind-borne navigation over extended ranges,"

"The balloons can fly at altitudes of more than 75,000 feet. While they do not have independent propulsion, the ALTA vehicle is designed to navigate by changing altitude and thus taking advantage of different wind profiles aloft. A state-of-the-art Winds Aloft Sensor (WAS) is also being developed on the program, which is intended to provide real time stratospheric wind measurements.” the agency said on its website.

Right now, balloons can only stay in one area for a few days before shifting winds take them elsewhere. But as the MIT Technology Review reported, ALTA’s wind sensor—originally designed for NASA satellites—is built to spot wind speed and direction from long distances and recalibrate as necessary to stay in one area as long as needed. The location is in the stratosphere. Unless the DARPA made an exception and lowered the altitude of their balloons to 2,900 feet, this would eliminate the balloon theory.

Witnesses said that the objects did not behave like balloons. The three objects remained in the sky over Kansas City for six hours, which is unusual behavior for balloons since balloons travel on prevailing winds from west to east. People reported seeing similar objects in New Jersey, St. Louis, and Kansas City in an east-west pattern, which is the opposite to the direction weather balloons travel.

Missouri MUFON Field Investigator Larry T. analyzed three videos submitted by witnesses in two different locations at the same time.  Amazingly, Larry found 20 other dark unidentified objects in the sky around the three large white objects. The video was analyzed frame by frame in order to see these other objects which were moving very fast, and seemingly checking out the large white orbs. Some of us have been investigating what we call the “Fast Movers,” which are UFOs that move so fast they are usually not trackable by the naked eye. These can only be viewed by looking at many video frames.

Many other UFO sightings were reported on June 20 and several days before and after this event, and are continuing. These include brilliant red orbs at treetop and ground level in the Waldo area of Kansas City; 18 transparent kidney-shaped rods at tree level we witnessed by MUFON Field Investigator James Bair; two metallic oblong objects were witnessed over Excelsior Springs (Northeast of Kansas city); and one sighting of a bright blue object which caused the witness (myself) to have light sensitivity since the event on the evening of June 20. In my case, I noticed a bright blue object on top of a streetlight at 10:00 pm and watched it for approximately 30 seconds, after which it shot off to the SE at extremely high speed. Immediately after this sighting my eyes became extremely sensitive to light and this has not eased up.

Three sightings of giant birds were also reported by witnesses on June 20. There have been 18 sightings of giant birds with wingspans measuring 12’ – 36’ feet in the KC area in the past few years which witnesses describe as an unknown black bird, a legendary Thunderbird from Native American legends, or a Mothman. It is unknown whether the birds are related to the UFOs, but it is odd that the Mothman sightings in Point Pleasant West Virginia in the 1960’s were accompanied by unexplained UFOs and orbs seen by many people. Although seemingly unrelated, the bird sightings should not be taken lightly. Either there is an unknown cryptid on the loose or 18 people have hallucinated something. Another explanation may be that some of these are drones or UFOs. I had a hawk swoop over my car on July 20  and I heard a humming sound at the same time. This may be indicative of drones disguised as birds, which further complicates the issue.

The Kansas City Chapter of the Mutual UFO Network hosted a special Town Hall Meeting on July 15, 2019 at the Ararat Shrine Temple in Kansas City, Missouri in order to present information about the recent UFO sightings during the week of June 20, 2019 and to take more reports. The group usually expects about 20 – 25 people to attend, but 150 people crammed into the room for this special meeting after it was covered in the Kansas City Star, USA Today, KCTV5, FOX4, Yahoo, and other news media. Field investigators James Bair and Jean Walker spoke to witnesses and took their first-hand accounts. It was clear that people want answers to the UFO question in general, and especially what was in the skies over KC on June 20.

Larry T’s analysis of case #101330 shows that there are additional objects in the sky near the large white object. After finding dark colored objects traveling on a straight-line trajectory, Larry was able to merge frames together in order to show the path of the objects. This is related directly to MUFON case 101408 (in Liberty) because they were both witnessing the same event and taking videos at nearly the same moment.  The Liberty sighting was 21.5 miles NNW at 336 degrees.  The National UFO Reporting Center had 5 sighting reports of the same two white objects on 06/20/2019. All these sightings occurred between 1900 and 2000 hours.

The white objects/craft were calculated to be 37.4 feet in length at 2,954 feet in altitude. The DARPA balloons are designed to remain in the stratosphere, so it does not make sense that the objects over Kansas City were the DARPA Balloons.

As with the other two cases, small black craft were seen in frame by frame analysis to do flybys of the two white objects.  Larry calculated one of the black crafts to be moving at a speed of 8,200 MPH, leaving one to conclude that the dark objects were U.S. military aircraft or craft of unknown origin.

Our conclusion is that the white objects viewed by many people over Kansas City on June 20 and the dark fast-moving objects that were only visible by looking at video frame by frame remain unidentified, even though the media is perfectly happy with the intimation by DARPA that they were special weather balloons. With the many UFO sightings and strange giant bird reports, investigators in the KC area are perplexed as to what is going on in our area, but we are determined to find answers. 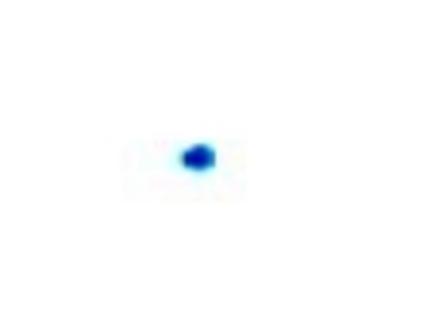